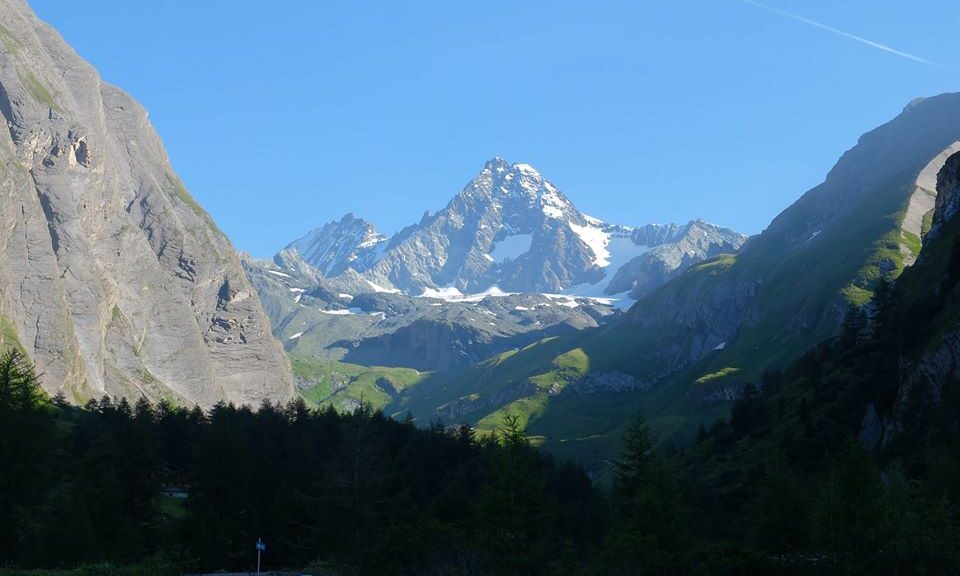 There were just three of us who went in the end, me, the line manager, and Fergus (Aoife couldn’t get off work).  Flight to Munich, car hire, drive to Lienz and first day’s trek cut short due to weather and cows- we went to the Lienzer hut rather than the higher Wangenitzee. The next day was grand, and we managed a Klettersteg (via Ferrata) up the Glodispitze, one of the highlights. A second night at the Lienzer and we were off to the Elberfelder Hut (overnight), then over the Boses Weibl 3131m to the Glorer Hut.  Forecast looking dodgy for our planned Grosglockner day, so M suggested we descend, take a bus to Lienz, retrieve the car, have an overnight in Kals, and then go back up to the next hut, the Salmhutte.  Ludicrous I thought, (but maybe not, and definitely better than Aviemore, her other suggestion), and so, it came to pass, with a nice lunch in Lienz, the world cup final and some beer and yodelling in Kals ( Fergus unimpressed with the latter, the yodelling that is).

Back up to the Salmhutte, pausing only to photograph some Edelweiss, overnight stay, and then M went down, while Fergus and I went up a very wet and cold Klettersteg to the Erz Johanne Hutte, which we literally walked into in the mist.  Conditions were horrible, the sort people in Glencoe or Glenmore Lodge would avoid, so we were absolutely amazed that guides were still taking hoardes of clients up the Glock.  We decided to sit it out, and it was a long day, but the forecast was better for tomorrow…..

Tomorrow it was worse, with serious Cairngorm winter conditions outside.  We sat in turmoil. Go down or up?  The guides were still going up, but they were getting paid, and knew the mountain.

Go up! It got better, the visibility improved from zero to about 10m, and the wind dropped.  It is a great climb, despite the fact that we saw sweet FA.   It must be wonderful on the 25 out of 31 good days in the month of July.

Having bagged the Glock, we went to Bavaria and did the Corkscrew route on the ZugsPitze the highest peak in Germany, part via ferrata, part protected path, but a big climb of just less than 5500 feet, just getting the summit before a thunderstorm.  Restaurant on top for a pint and a big sausage and a cable car down- great!

Then 2 rest days, one at Garmisch for a fireman’s festival, much oompagh music and beer, and one at the castle modelled from the one at Disneyland.  (Valli might have something to say about this!!)

What to finish off with?   Perusal of the map revealed a peak called the Wankspitze, with a via ferrata called the Wank Klettersteg (much juvenile sniggering).  Well, you would HAVE to climb it wouldn’t you?  Margaret, having christened it the Wankhorn (more juvenile sniggering) would have nothing further to do with it, so it was just me’nfergus who set off.   It was a very ‘hands on’ affair, with the first section in particular, but I will make no further comment other than ………