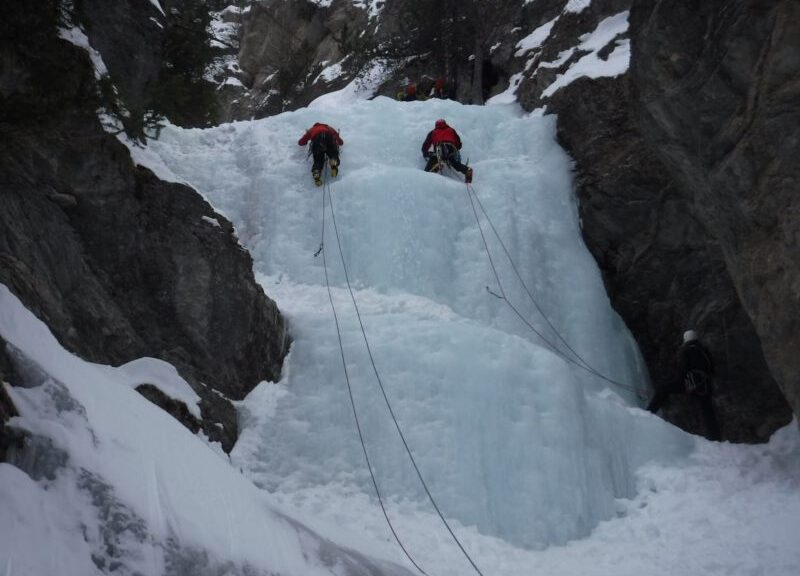 It was Jack’s idea from last year in Cogne, the ice would be easier, more variety of angle, and more Scottish Gully-like, so the same 4 signed up for Argentiere le Bessee 2019.

The first day was simply superb, a narrow two pitch 3 called ‘Easy Rider’, followed by the left branch of a Y gully called ‘Holiday on ice’, also 3, but about 7 pitches, albeit not all of them climbing.

The following morning it was snowing heavily, but stopped about 11.  We felt the routes would be a bit banked up, but decided to go up and have a look at ‘Holiday on ice’, right branch (only the first pitch is shared).  It was a bit harder due to having to clear the fresh snow as we climbed, but still good.

The classic 4 ‘Les Formes de Chaos’ was on for the next day, and half of France had turned up to climb it, and two Corsicans just back from Scotland. No, not climbing there, but watching the rugby. “The Scots, they taka outa Jonnee Sexton beeg time.” We queued for about an hour, and in the event, I didn’t even get off the ground as Jack was hit on the hand on the first pitch by a big lump of ice, and had to be lowered down.  Broken finger.  No question of further climbing for him.  George and Finbarr were at the top of the 60m first pitch at this stage so we retired to the coffee bar and sat with the skiers to watch them.  Due to the congestion, and a tricky boss third pitch, it took them all day to climb it.

The next day we decided to have a rest day and go snow shoeing.  Not much of a rest really, but nice to look at something other than ice,

Our Gite/Auberge at Celiac was great and the food even better, but we moved down to Argentiere, the target for Thursday being a grade 5 called Hiroshima in the Fournel Valley. Following a very discernible path down to the river, it disappeared completely on the other side, and approach to the base of the route involved uphill swimming in waist to chest deep snow.  I decided there must be a better way, and left George and Finbarr to it.  Re-crossing the river and following the track up the valley, no other options presented themselves, so I went back down and was battling my way upwards in George’s collapsing steps, when himself and Finbarr appeared with Jack back on the other side. The route was in dangerous condition, so they had exited on the very path that I had been seeking.  Plan B was a man-made ice wall just outside Argentiere (water pipes at the top) which provided us with 3 enjoyable routes of about 50m.

The next morning we were starting airport-ward, and seeking a route in the La Grave area which, being higher, should be in safer condition that Hiroshima. George (from Ballymena you understand) was too tight to buy a guide book, so all were left to my recollections of climbing there with Bill back in the last century.  “Le Pylon, that’s it over there”.  But it wasn’t, which became clear after the first pitch.  La Croupe de la Poufiasse 4+ 220m *** the classic of the area, was duly climbed by mistake, twa easy pitches by Finbarr and myself, then George leading the crux, followed by a busted Finbarr, with myself thumbing a lift back down with them.  And so, to Grenoble, and home.

Well, I would love to go back to this great area,  but have concerns at the numbers of people now ice climbing in these popular destinations. Grade 3s are a lot safer, as the pitches are shorter and the steep steps tend to be separated by flatter areas which catch the falling ice.  You can also wait until the party above clear the step, but pressure of numbers from behind, means that you tend to start below them with the danger of a piece of ice the size and weight of a Le Creuset frying pan smacking you on the head.  If you climb below someone on a rock route there is a chance of something coming off, but on an ice climb it is almost inevitable, and the more sustained the route and the more climbers above, the greater the risk.  No one’s fault really.