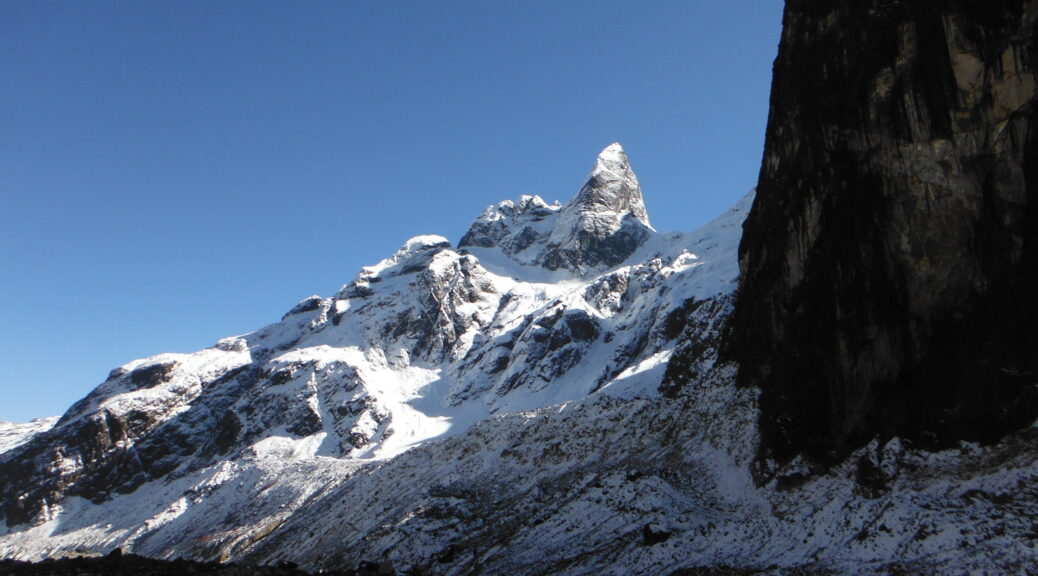 Having been collected by Jeep from Bagdogra Airport, we spent one night in Gangtok ( the capital of Sikkim), before driving to Mangan, to a homestay for two nights, while Raja bought supplies and hired porters. A rough and exposed track took us to Beh, and the end of the road. Three shortish day’s trek along the 1921 Everest expedition approach track, the same one that Younghusband’s invading army used to access Tibet, and also the route that Buddism came into India, brought us to Tolung, through magnificent primeval jungle, where we spent an uncomfortable night camped among a herd of wild yak.
The main path goes over the Kishong La, but we were bound for the Zumthul Phuk, and 2 exhausting days bushwhacking through a rhodedendron filled gorge, brought us to base camp. Our 15 porters were paid off at this point. They were a cheerful bunch, and how they got the loads through such difficult terrain was a miracle. The next morning was scheduled as a rest day, but we walked up above the camp to discover a beautiful lake, unmarked on any maps, with a glacier flowing from the base of Siniolchu calving icebergs into it.
To the left the Rock Needles towered up into the encroaching cloud. Back at camp, we killed a snowy afternoon by climbing a gully above base. Toothache at night.
The next morning was clear, so we carried loads up to ABC , around the lake, and up the glacier to a spot just below a big buttress at the base of the needles. A vast amphitheatre had opened up around us, festooned with Trango Tower type peaks, none of which looked possible for ordinary mortals. Probably the most amazing place I had ever seen, and such a privilege to be the first climbers ever to see it. Euphoric, we headed back to base camp. It clouded in and snowed again. Spent afternoon and night in bag with severe toothache. Will have to descend with Mindrup and Jack, and try and find a dentist. Shook piles of snow off the tent and packed up. Surprised that Keith also coming down.
Got out to Mangan in two very tough days. Abscess improved as we descended. Got course of 2 antibiotics as an alternative to extraction, and took a taxi to Darjeeling with Jack and Keith, as going back up not an option. Keith went home, while Jack and I kicked around Darjeeling for a week, before being joined by Jimmy, Kevin and Ursula. All except Kevin went off to trek the Singalila Ridge for 3 days, arriving back at the same time as Raja, Thendrup, and Martin. The weather had improved, and they had a few days very successful exploration of the area, reaching 2 new cols, discovering 3 hitherto unknown glaciers, and ascending one minor peak.
After a further day in Darjeeling, we took the overnight Darjeeling Mail Train to Kolkata, where I did the Sujat Mukherjee memorial lecture, had dinner, and flew home.