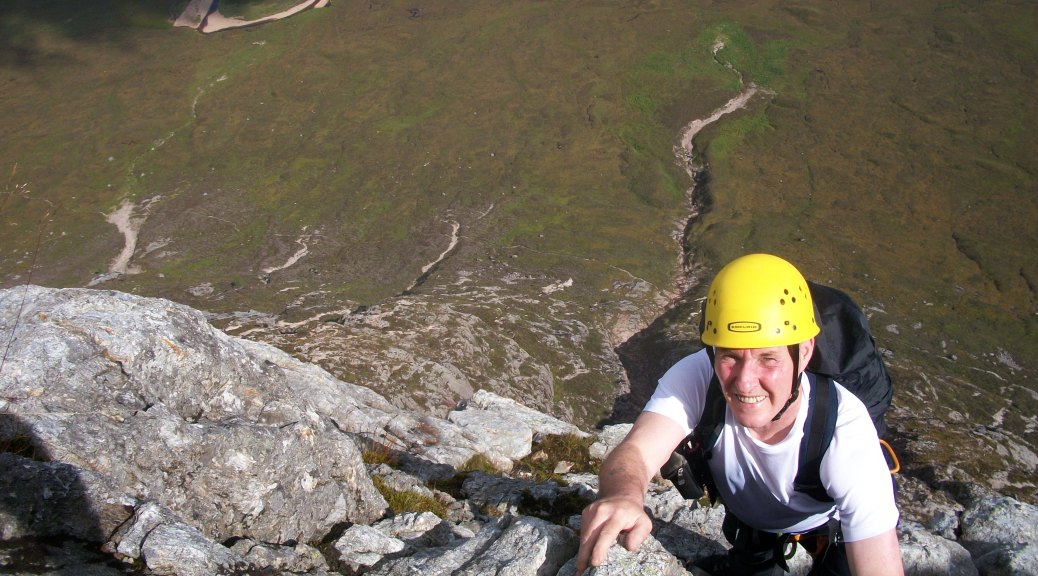 Martin Boner and I met up in Glasgow airport and off we went to Fortwillian (Bill’s Fort). It was a nice journey up but that all changed when we woke next morning to persistent drizzle. Nonetheless, being the foolhardy souls that we were we headed off to see if anything was possibility on Ben Nevis. By the time we got to the CIC hut – we were soaked through. So we opted for a reconnaissance of Observatory Gully. A challenging struggle up the scree slope but were rewarded with close up views of all the major lines. (It didn’t rain all the time – just most times). What made it worthwhile was that the small glacier in the upper region of Observatory Gully had melted underneath and it was possible to walk under it. We came across submerged waterfalls that came directly from 0.5 Gully and other main climbing (drainage) lines. We had a close up inspection of Dave McLeod’s climb on Echo Wall – hey major respect.

Saturday wasn’t that much better so off we went to Glencoe. Martin had it in his mind to climb the South Face of A’Ceallaigh. There was much vertical heather to cling to but there were short rock obstacles as well. The dry one’s were good fun but the wet faces were avoided by the line of least resistance. When we got to the upper cliff tier, the rock provided very enjoyable scrambling with a nice finish. Neither of us fancied downclimbing the almost vertical heather so we opted for a ridge walk to Am Bodach (Start of the Aonach Eagach ridge) and a descent from here. At least I we can say that we have now completed the Aonach Eagach Ridge from start to finish.

Sunday was home day but the sun shone and we thought we had enough time to climb North Buttress on Buachaille Etive Mór in Glencoe. We started out at 9.30am and were on the summit by 1.00pm. A highly recommended must do climb. Most books describe it as a scramble. However, it’s steepness and exposure is very sustained right from the start. There are 4 identifiable pitches but really the entire route is one very long and sustained pitch. In my opinion, it is more serious than Curved Ridge and would certainly challenge the difficulty sections on Agag’s Groove. Others will have their own opinion but sure that’s OK too. For us, it was a fantastic outing on an iconic mountain. Total time from A82 Carpark to summit and back to carpark was 5 hours. We even had time for dinner in Tyndrum on the way to the airport. Youtube video in 2 parts