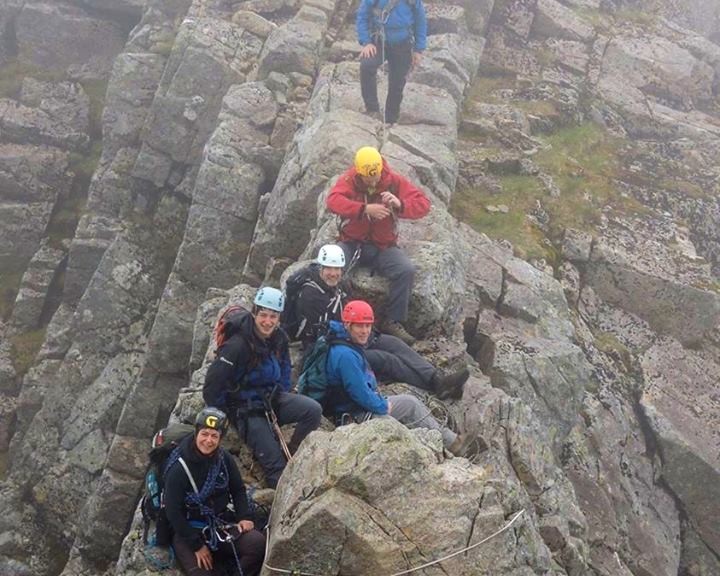 PJ, Thomas , Margaret and self went to Scotland to prepare the way for the great one, one whose destiny was about to be fulfilled. To pass the time before the coming, Margaret led me astray, to pay homage to the unworthy, a mere Corbett of such nonentity and remoteness, as to not justify the last trudge through the mist and drizzle to its miserable highpoint. ( PJ and Thomas wisely did Sgurr Donail on the Ballachulish horseshoe).

So demoralised was I, that I could venture no further than the retail wilderness of Fort William Main street the following day.

Spirits recovered on Thursday and we had a fine walk over the Grey Corries range, bagging a number of summits including a couple of new Munros for me.

On Thursday evening, the great one and his disciples arrived, to set up operational headquarters in Witherspoons.

As fortold in the scriptures, the day arrived, with the multitude gathering in Glen Nevis in anticipation of the great event.

Heavenward, they rose in unison ( except the old and decrepid, who took the cablecar round the back) up the flanks of the Lochaber giant to the summit, where the great one gained enlightenment, and joined the ranks of the celestials- (Margaret and Jimmy). Nectar was in great supply ( and Dungiven paintstripper), before the multitude floated back to earth on a airborne chariot, sort of.

Celebrations went on into the night, but in the morning there was light, and it was good.

They sought the celestial tower, and after much labour, privation, (and dehydration) the faithful came to the gateway.

But there came amongst them, a false prophet, Finbarr, who leadeth them ashtray, and they forsook the anointed one, so it came to pass that the first became last and the last became first. And the lord sent a cloud to separate and confuse the pilgrims, and it worked fairly well, but the faithful prevailed and reached the promised land, some eventually, and indeed they came upon great multitudes milling about looking for salvation, or the way down.

But gettin down was another story. ( Revelations 2, V17).

Margaret did another Corbett.