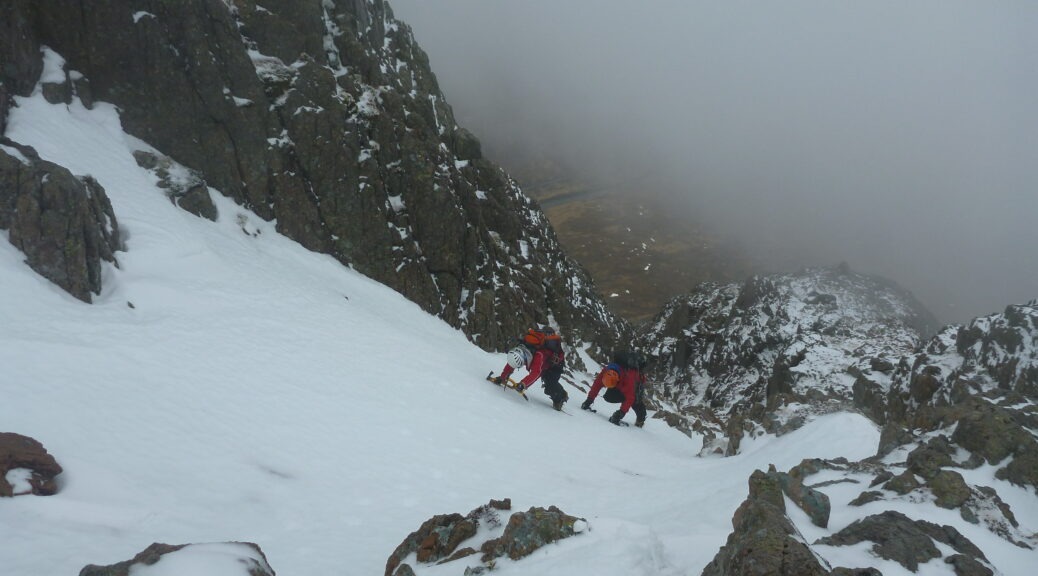 Bravehearts 2015
All a bit last minute due to the unavailability of the new Hobbit van, but we managed to get booked into the MI accommodation at Inchree Onich for 4 nights, fired the stuff into the car and drove over on Tuesday. Wednesday, Margaret and I did Buachaille Etive Beg with a guy called Russell, as a warm up,( a Munro I had not done before, so not bad for a warm up I suppose). Snow was good but nil visibility!
Met up with Keith and Sandra for Thursday, and Margaret prevailed upon us to do the Corbett on the South side of Lough Leven ( another Garbh Beinn 867m). Nice, and we stayed below the cloud which obscured the N side of the Aonach Eagagh, and the Mamores on either side of us. Alun Richardson did a slide show at night.
It was very sociable at the Inchree centre, and word had it that the Gr 2 at Sron a Lairig was in condition and a great outing, so Keith Sandra and I did it on Friday. No views again, but great fun with lots of variety, including a steep gully variation no one else had tackled. Dave and Sandra arrived.
Creise was one peak in Glencoe I had not done, so it was on the menu for Saturday, again with Keith, Sandra and Dave ( very nice of them as they had done it before). The snow had suddenly sugarified so gully plans were shelved in favour of some nice hollow ice ( Sandra loved it) and mixed rock and snow ( and cloud). The snow improved higher up and the last step to the top of Sron a Creise provided some excitement, before exiting up the crunchy neve on the top. Onwards to Creise, descent, and re-ascent to Meall a Bhuiridh. Took the ski lift back down, just in time to watch Ireland beat France on the telly in the Onich Hotel. All very satisfactory indeed! Topped it off by a St Valentines meal for 6 in the hotel with a happy wife who had just claimed her 72nd Corbett, with Sandra (Kennedy).
On Sunday we were starting to head back. The others had plans for the Aonach Eagagh, but Corbett duty called again so we went South to Glen Lochy to claim the scalp of Beinn Chuirn. The old knees were starting to feel the strain of 5 days solid toil, and the terrain was steep, but at least it was clear ( I always get a good day arriving in Scotland and good day leaving, it’s the bit in between that’s the problem).
Dave and Sandra had kindly offered us accommodation for the night in their new bothy, so we made our way there. They had wimped out of the AE Ridge on the somewhat spurious excuse of food poisoning, but treated us royally in their fabulous new residence ( no resemblance whatsoever to the bothy referred to above) with a superb meal cooked by Sandra ( joke, it was Dave). Thanks to both of them.
Home… A great trip!