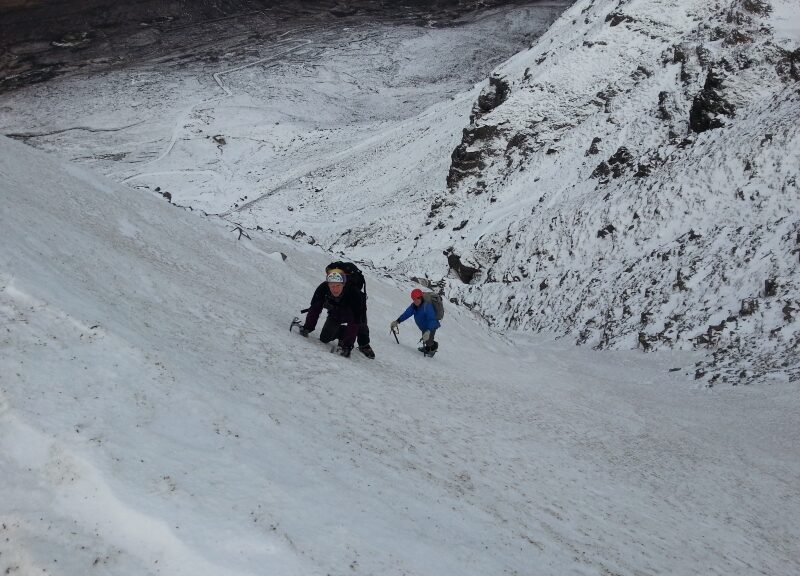 The weather had smiled upon us once more so Marty, Alan and I headed back to Muckish, this time with an eye for Divided Loyalties. Having seen it on Sunday we thought the cold snap would have produced some build up, but sadly not.
After some manoeuvring with Marty’s van we arrived at the start of the miner’s path and decide to ditch the original plan. It just looked too lean. And so it was that we headed off once more for god’s own gully. It was still the only route in condition.
Once again it provided great entertainment all the way. This time it was much more relaxing without anyone ahead of us, particularly someone without axe or crampons! The snow again was in great condition and the icy step providing a bit of interest and the top snowslope a great sense of exposure.
Marty was keen to do more so we traversed along the escarpment and descended just to the right of the colossus pinnacle. This gave us a close view of the summer possibilities. The fresh snowfall over the Monday and Tuesday had added a good deal of unconsolidated snow into the descent so some wading was called for.
We traversed along the base of the crag to a line of Iain Millar’s just right of Divided Loyalties. Sadly this was not in as good condition as the first. Although it looked good it was full of powder. At this point Marty had enough of carrying his sack and threw it away down the slope. Luckily his camera was in his hand and a banana was rescued from the snow! A lot of cursing of the soft snow brought us up to the final snowfield but it really was a pale imitation of the first gully, but a good excursion. Not recommended just now. Maybe God’ Own gully does deserve the title.
We descended the miner’s path and were surprised at the amount of snow that had banked it out since Sunday. Alan and Marty traversed back to retrieve the sack and we all headed back to the van. A great day out.

One thought on “Another Appointment with the Gods”