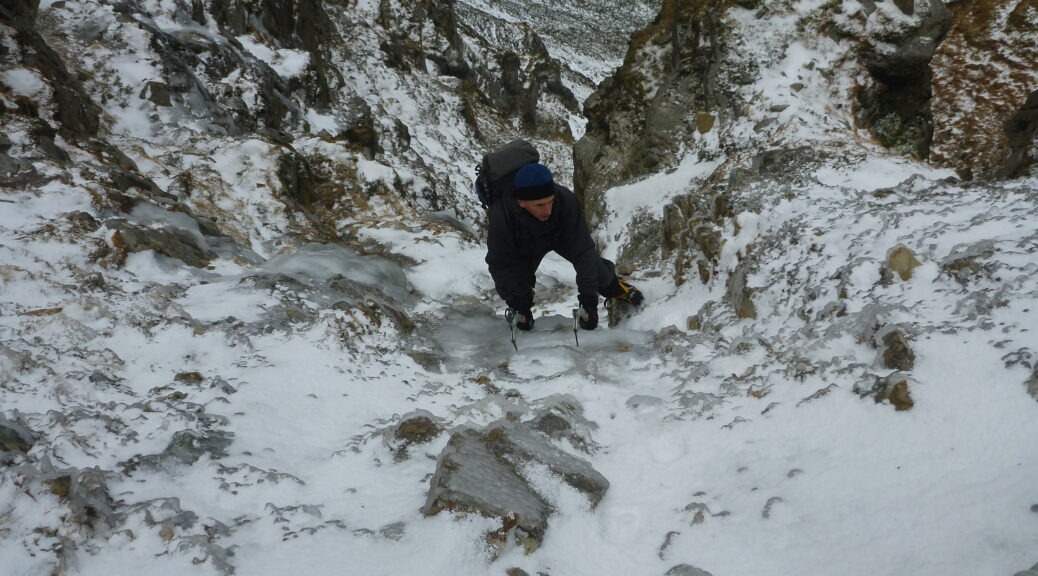 Geoff and I left NWMC to climb Muckish from the gap, and drove around to north side in the hope of some sport in the gullies. First impressions were not good, with the north face swept clean by recent gales, and snow thin on the ground! We followed three guys up the miners track, one of whom branched off to the right, in the direction we intended to go. The ‘Funnel’ had no snow in the chimney and looked more like a rock climb. So we continued past it, into the grandly named ‘Gully of the Gods’ following the lone figure ahead. The loose hail on the slopes became snow- ice in the gully, and as we donned crampons, we looked on in amazement as the ice axeless and cramponless figure above kicked his way up the gully. The hard snow/ice became icier, and still superman remained ahead kicking half inch toe holds into the neve, and avoiding the pure ice by stepping on protruding rocks. It was solid grade 2, with short vertical steps lacquered in thick green ice, and above a steep slope of hard packed snow to the rim. Our ice axes bit in beautifully, and calves groaned as we approached the top, watched from above by batman. Batman’s name was Andrew, from Derry, mightily relieved that he had survived this gully,( that he had done the previous week with no problem at all). Conditions were entirely different this Sunday!
We met up with the other two, and then North West MC at the cross. Lovely conditions (temporarily) on top, made lunch a pleasure, and then we headed down, meeting Kevin Magee plus dog en route. A *** day.

One thought on “God’s Own Gully”