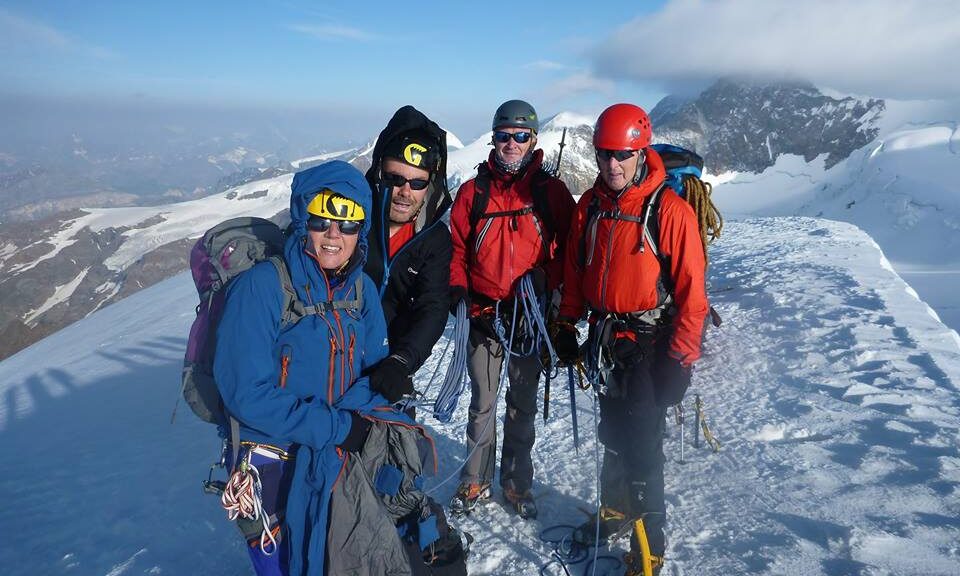 Faith in mountaineering now fully restored, after many recent washouts!We ( Finbarr, Aoife, Fergus, Marg and self) hired a car at Geneva, and drove to the alpine meet in Saas Grund joining club members Cliona, Gerard, Andrew and Sarah, with Sandra and Dave arriving shortly after. There was a fair crowd of MI members camping in the sunshine, with Niall and family renting in the village. Some idiot came up with a plan to walk into the Amageller hut the next day, traverse the Dri Hornli Ridge, stay overnight, and do the traverse of the Weissmeis 4000m+ the next day. A bigger idiot ( me) thought it was a good idea. Reality kicked in when it took everything I had to make the hut, and the rest of the day to recover. Andrew and Fergus did the Weissmeis traverse, while Finbarr and self, with Gerard and Elaine and Sandra And Dave had a simply superb day on the Dri Hornli ( a cross between the Cuillin Ridge and Howling Ridge, but far better). The next few days saw the Allalinhorn, the Nadelhorn and the Jagihorn climbed, as we prepared for the Spaghetti extravaganza.Friday saw Margaret and Aoife take to the TMR ( Tour de Monte Rosa), to trek to Gressoney from Saas Grund, while Sandra, Dave, Fergus, Finbarr, and self drove around via the St Bernard tunnel. Lifts took us to 3600m and a short trek to the Gnifetti Rifugi, which was jammed with people, it being the weekend. The atmosphere was jubilant and the food was fantastic!! In the morning we followed hoardes up the glacier, and Vincent Pyramid 4215m, Balmenhorn 4157m, Schwarzhorn 4322m, Ludwigshohe 4341m, and Parrotspitze 4432, fell to our weary tred, before we had to make the exhausting ascent to the highest hut in Europe, the Margarhita, at 4554m, atop the Signalkuppe. In fact the fourth highest summit in Europe is the toilet on the top (our) floor as there is a step up onto the throne. Thus, the saying ” I am going for the summit, and may be some time”. This exhausting day coupled with sleeping ( or not sleeping) at altitude, meant that we were down to three for the ascent of the Dufourspitze the following morning. We made the Zumsteinspitze in good time, but descending the knife edged snowy crest to the sattel was dry mouth time, and when Fergus’s broken wrist started to give him trouble on a down climb, we decided to give the alps’ second peak a miss, from that side.The next day was the mighty Liskamm, and on Martin Moran’s recommendation we opted for the Cresta Sella. Getting to the satellite peak was unexpectedly tricky as the hot weather had melted any path of ascent, leaving steep ice, and necessitating placement of several ice screws. Getting down to the col looked problematic, and the ridge itself long and loose, so only two decided to give it a go. When the exhausted two returned down the ridge they were greatly moved to see that the other three had loyally stayed put to support them in their hour of need. It soon became apparent that the three were in fact stuck, the rope being much too short for the precipitous icy descent to the glacier on the other side, and the wise decision was made to remain put. Even with two ropes and placement of ice screws the descent was prolonged and tricky, with two abbs and a pendulum. 14 hours after setting out, the weary crew trudged onto the Quintino Sella hut. Amazingly, they were fed, despite being one hour twenty minutes late for dinner. I love Italy. This simply would not happen in France!!Dave and Sandra decided to head down the next day, while Fergus, Finbarr, and self climbed Castor 4225m in just over 2 hours from the hut (about an hour under guide book time) then followed them down to Gressoney, where Marg and Aoife had just arrived . A fine celebratory meal out was had at the Flying Bra, followed by a rest day ( Dave and Sandra decided to go cragging but forgot to bring a rope), and the last day we walked over the Rothorn Pass enchanted by all the lovely alpine flowers we had denied ourselves by being up on the glaciers pretty much all of the trip.Super trip, now I need a holiday…..