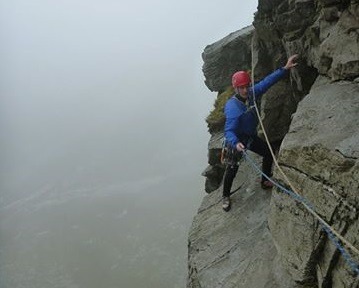 Back to Muckish again, for the umpteenth look at the Colossus, the big pillar off to the right of the miners track- but this time we had a plan…

So much for the first bit of the plan, (that the evening sun would come around and bathe the north face in benign warmth).  The cloud was down.

Part 2 was the erection of a bomb-proof belay on the short side of the pillar.  We would attempt it on the long side, and when/if the leader (Marty) got to the top, he would untie and drop the end of the rope down the short side to the belayer ( me) who had scuttled back around.  The rope was secured ( no need for a desperate search for an ab point on top), and we would ab back down the long side.

Part 3 was a fixed line across the exposed ledge to protect my peregrinations* back and forth.

This went to plan and soon we were across the ledge, me belayed, and Marty climbing up into the mist. From the belay climb into an unattractive corner, and swing out left and continue up on sloping spikes etc to a big ledge.  He had been to the upper ledge before, and made short work of the first bit.  Sounds of hammering echoed from the cliffs as he placed two pegs up on the ledge ( there was nothing else) something he learned from his last visit.   I craned my neck to catch glimpses of my noble leader as he went this way, then that, then this way again, managing to place a good cam high on an overhanging crack before retreating.  Then he traversed left around the corner.  “Slack, Slack”, I was giving him slack as best I could,  but the rope was going through the high cam, then back down, under an overhang and around the corner.  I kept playing out and gradually it became taut.  Suddenly he was on top.  The rope was flicked over, no more drag, and he went up the final step to the top, untied and dropped the rope down the short side- to which I had peregrinated*.  I tied it to the belay and peregrinated back across the ledge.

My turn.  The first bit was a bit awkward and exposed, and my hands were cold, but ok, about 4b, to the upper ledge.  Then I had to recover Marty’s cam in the high crack, and back down. The traverse left was easy and there was this lovely wall with good holds, but then there were no more.  How Marty got up that with drag is beyond me, because although it was only a couple of moves and the friction was good, it was quite ballancy, and  totally devoid of protection.  I found it unnerving enough on a top rope.

We abbed off ( a free abb) stripped everything and were back in the pub for 7.30.

A great day and a great climb, Goshawk HVS 4c ( or 5a)  see what anyone else thinks.  I had been looking at this for almost 40 years.

One thought on “Peregrinations and a Goshawk”