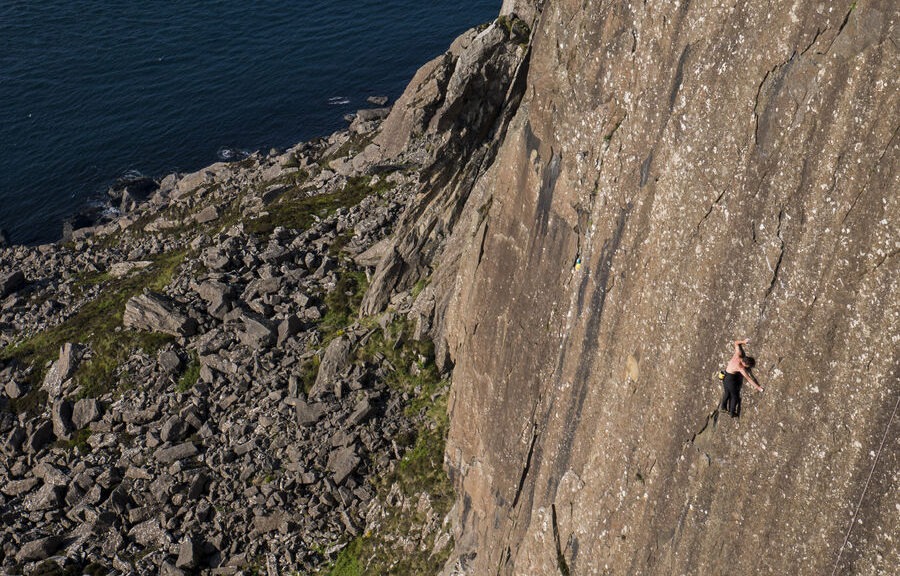 The Fairhead Meet for me started on Friday afternoon. I met Geoff Thomas at Sean’s car park before heading over to Farrangandoo, which turned out to be a good choice, not being anywhere near as busy as the Prow.

Gerard joined us later, just in time to see me being humbled by ‘Slittery Slat’ which was a bit more committing and run out than I bargained for.

On Saturday morning I met Kevin McGee, we headed over to the Ballycastle decent gully to meet Gerard and Geoff who had just climbed ‘The Brat’. The popular routes were very busy so I suggested ‘Odyssey’ a multi pitch VS which to me is every bit as good as ‘Gerona’, ‘Taoiseach’ or ‘Chieftain’.

Kevin and I considered ‘Blockbuster’ and other multipitch options but the queues waiting in line kept us walking to beyond the Gray Mans Path. A route called ‘The Vital Spark’ which Kevin was keen to lead was free so we jumped on that. After which we joined the line for ‘Toby Jug’ which was a good route to finish the day.

Back at the campsite we bumped into Marty McGuigan, Patrick and Adam Tinney, Ivan and Karen, not a bad showing of CCC types and I know there where others around over the course of the weekend.

The Alex Honnold talk was excellent; he even tailored his presentation to mildly pock fun at Irish climbing ethics, suggesting the occasional bolt might not be a bad idea in place of sketchy gear or sky hooks held in place with Blu tack. He came across as a nice guy as well as being a wildly talented climber.

The next morning seen Kevin and I heading back to ‘Blockbuster’ this time we managed to be ahead of the crowds and where the first on the route. It is a full on adventure giving sustained and interesting climbing for most of the route. We then headed to the Prow to meet up with Gerard, Marty and Ivan who had done a few climbs and were packing up to try for a route in the Ballycastle decent gully hoping it may still be in the shade as the Prow was becoming way too hot for comfort.

Kevin, Patrick, Adam and I headed to the Small Crag for a relaxed late afternoons climbing in the shade.

I headed home on the Sunday evening but I believe Patrick and Adam were keen to do ‘Blockbuster’ so Kevin was back on it again on Monday morning, a true glutton for punishment.

I didn’t think I would ever see so many climbers at an Irish crag, apparently the numbers where somewhere in excess 450. The exceptional weather, the world renowned guest speaker and the excellent hosting by Paul Swail backed by MI all went to making this years meet such a success. Not forgetting Sean McBride and family for opening their land and farm to hordes of climbers, making everyone feel welcome and putting so much into making it such an excellent event https://gutepotenz.de/.