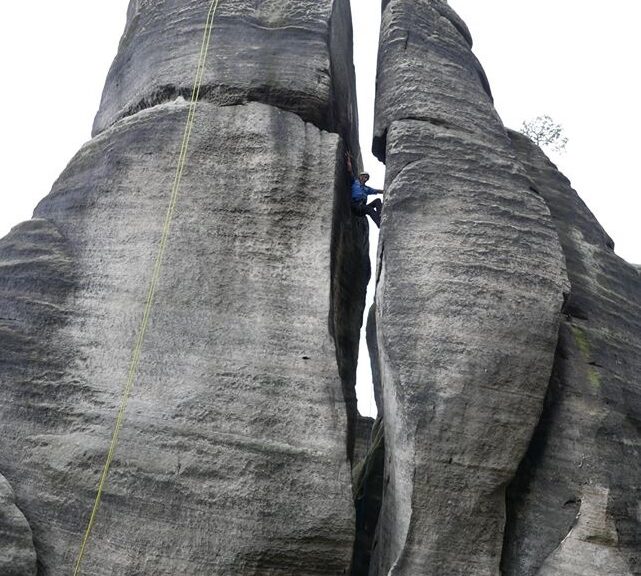 Five of us flew Ryanair Dublin to Wroclau, in Poland, to be met by Ivan and Matty, and escorted the 100km drive to a cottage he had rented in the middle of the village of Adrapach, just across the Czech border.  Karen had supper prepared for us and Ivan supplied the beer.

In the morning the wonder of our surroundings became apparent, as the edge of this remarkable massif of pinnacles and towers could be seen across the field.  Leisurely coffee and cake in the café was followed by an exploration of the nearest section of this city of rock.   It is a tourist destination with well trodden walk ways threading their way between the most remarkable features, but the side alleys are the domain of the rock climber.

The last guide book was 15 years ago and there were over 10,000 routes then.  It is an intimidating place if you are a climber, and many a visiting rock star has left with his tail firmly between his legs.  The rock is steep, holds rounded, and the ethics ramp the risk factor up by a multiple of at least 2.  Chimneys and off widths abound, hand jamming cracks (the local climbers wear gloves), and normal gear and chalk are banned.   Protection are knots tied in the rope, jammed in with a paint brush handle.   There are ring bolts, but they are 20m apart,  the first one is at least that off the ground, and I have no idea how the first climbers placed them, as you have to climb the tower first before you can abb it.  AND, they all go a have a few pints in the morning BEFORE they go climbing.  Awesome.  But I suppose at 70 cents a pint Dutch courage comes cheap.  10 pints and change out of 10 euro!

Ivan wisely decided to start us off on an easy grade 3. Ivan’s son Gerry (he who was lusted after by all the ladies) led and we took turns to get jammed in an off width.  Very funny once you had done it, not so funny when you were clamped helpless and hopeless in its sandstone clutches.  We abbed off somewhat humbled and traumatised.  Something easier Ivan?  Ivan scratched his head, too diplomatic to say that there was nothing easier.  He picked a nearby short grade 5 without offwidth or chimney, and dignity was restored somewhat, with Sandra climbing it in trainers and a couple of us managing a harder variation nextdoor.  Pub and Pizza and all was well.

On Friday, Gerry was keen for us to try one of the classics, the normal route on the King, but as a warm up we did another pinnacle involving a chimney, an awkward traverse, and a short climb on pockets to the top, led again by Gerry.  The King could not be put off any longer.  The highest in the area, this tower is split by a 27m chimney, to the top of the lower of the two parts , step across, and climb a crack/groove onto the crown. Gerry led, followed by Martin.  Then Sandra, and we watched as she taught herself the craft of upward momentum in the bowels of a chimney.  Tension rose as she reached the top of the chimney, bridged, and looked up at the final section. “Aw fir fecks sake”, (said with such feeling), reached our shocked ears.  Finbarr next.  There was a lot of wriggling with no apparent result, before he cracked it, and away he went.  Me next (less said the better) and Matti, whose 6 foot long legs must have struggled it the confined space, then Ivan, then down to the pub.  The house began to fill up as friends of the Krella family arrived and we had a guitar music session around the fire with Czech and Irish songs sung with great enthusiasm.

Egos were better, but now backs were bruised, so we decided to go walking next day, after a swim in the lake (‘No swimming’ the notice said, but Czechs do not appear to be able to read this type of sign).

This walk took us around to a different side of the rock city, and we did a loop around terrain much like Petra, very popular with tourists, and busy as it was now the weekend. Ivan pointed out various epic climbs, some almost 100 years old.  We watched young climbers, mostly top roping hard routes.  This can obviously be done if it is not a detached tower.  Lunch and pints at the far end, and a walk back through the pinnacles.

Our final day, we went climbing again to a grade 4 tower called Noon.  Gerry had gone to do hard things, so Ivan led, followed by Martin and the rest of us, including Margaret, who showed she had lost none of her old skills to Munroing and Corbiteering.

In the morning,  Martin left for Chamonix and Ivan put the rest of us on the right road to the airport.

A great trip and thanks to Ivan, Matti, Gerry, Karen and all their many friends for a level of craic and hospitality that will be hard to follow.