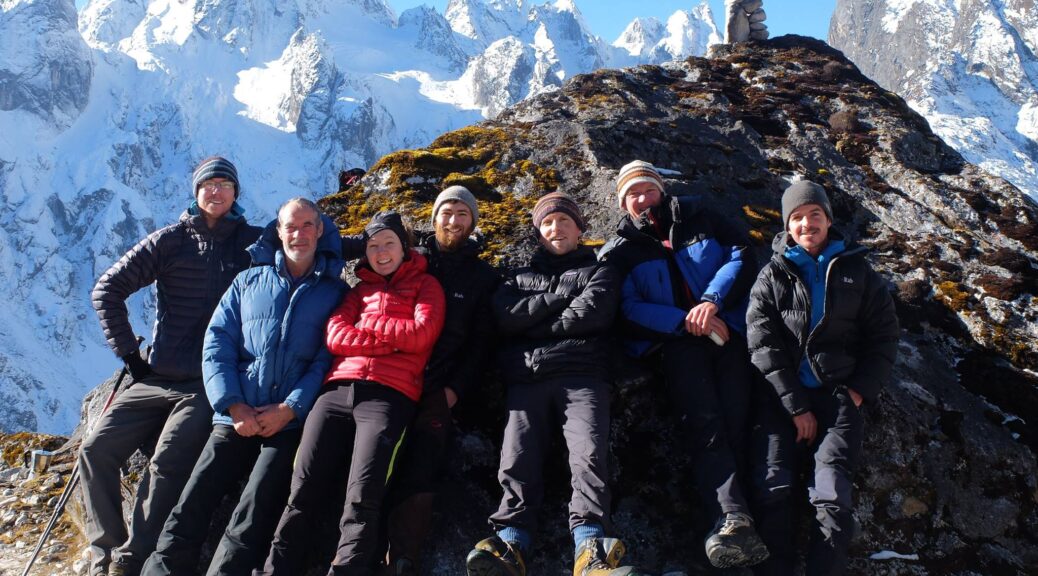 Why did I go?  I knew the terrain was tough, the weather patterns unhelpful, and there would be long periods in the sleeping bags between short periods of euphoria.  Maybe I had to get the monkey off my back after leaving the previous expedition almost as soon as I got to base camp. Maybe I thought it would be different this time, maybe I thought that with a fit young team of cutting edge climbers we would achieve something special?  Maybe I wanted another great adventure, or maybe I just needed to lose weight.

No time wasted on the approach. Into Kolkata, and the next evening we were back in Joe Wongden’s homestay in Mangan (he who has a sister in Antrim).  Never thought I would be back there again. A day for Raja to buy food, and the next day we were on the road again, but only half way to Beh, as a land slip in August had dammed the river and created a lake (and 18 submerged houses).  We unloaded, crossed by dinghy, and got 2 more jeeps on the other side.  The approach by foot started the next morning.  Another landslide had swept away the path necessitating a very difficult exposed traverse across the cliff, during which one of our 16 porters fell.  Fortunately he wasn’t badly hurt, but our supply of vegetables landed in the river, and was last seen making good progress down the Ganges towards Kolkata (resulting in a restricted menu of rice and Dhal).  We made the Tolung Gompa about 2.00 PM (never thought I would be back there again) despite the attentions of leeches, killer bees, giant ticks and a cobra.  Next evening to Tolung Yak camp (without the yaks) and then river camp, then the ascent from hell to base camp (never thought……..).  The weather was good to base camp, but as soon as we arrived it clagged in and rained and snowed for a couple of days.  After that it settled to a pattern where it was clear from 5.00AM to about 11.00, and after that rain, snow, mist etc

We crossed the river up at the lake (at the cost of one broken and mangled finger to Piaras) and set up ABC at 4300m in the valley above and to the right, with dramatic views of the Singel chu Needles. In the next four days we climbed 3 unclimbed peaks near the camp, Diwali Lho 4960 Scottish Gr 111 apparently, and two others either side of a saddle, the second a VS rock climb.  Another peak was attempted from a high camp, but abandoned due to danger of frostbite.  The photos of this area do not even come close to doing it justice.  These guys are good climbers who, having studied pictures taken by the 2014 expedition, had big ideas about routes on the most challenging Zumthul Phuk peaks and needles.  They were unprepared for the scale, technicality, and level of commitment required when they saw them in the flesh, and wisely settled for coming home alive.  Up in the valley of ABC there are numerous more amenable unclimbed peaks, but with long moraine approaches.  Back at base camp, 3 had had enough hardship, and descended with Raja, who was going down to arrange porters and a visa extension.  Five stayed a further 3 days.  We did a bit of exploration towards the German pass, but I developed a sore ankle after that, and decided to rest it before the descent from hell.  Painkillers and determination got me down to Tolung Gompa in 9 hours, and the following day something similar to Mangan.  This was the best couple of days weather we had!

A day in Mangan, two in Darjeeling, and overnight on the train to Kolkata, with Raja entertaining us to dinner and a Bollywood Band on the last night.  Didn’t climb to the summit of anything, but it was a great full on mountaineering experience, pure exploration, despite the hardships.  Good bunch of lads from Ireland and girl from Finland, with never a harsh word spoken, and Raja’s team of Lackpa, Irun, Rakesh and Phurba were cheerful and tireless.