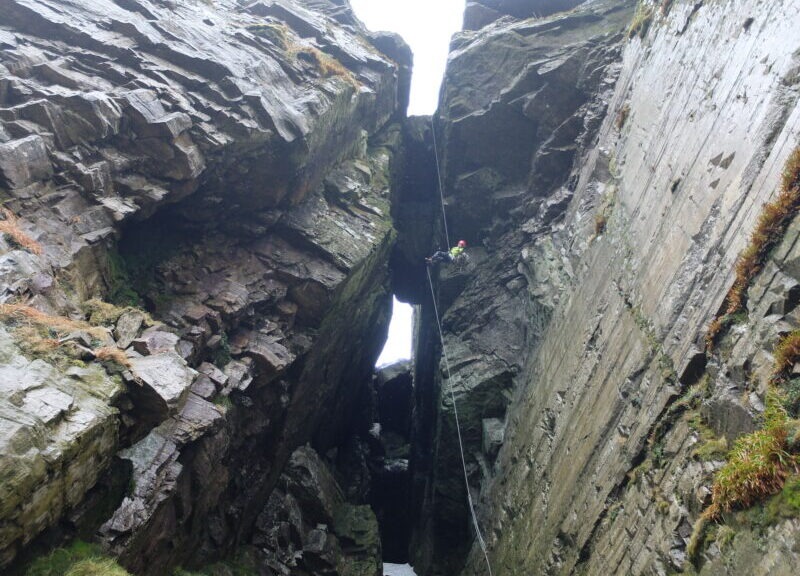 The faint hearted heeded the weather warning, the brave, (or foolish), didn’t let the impending storm put the wind up them, and proceeded with the plan, (more out of morbid curiosity than courage I imagine). Marty was there to meet us, clinging to his van, as was Martin Bonar (who had walked over Muckish from the gap) and Terry and his incredible electric car.  We were, Marjan and Alan, PJ and Anthony of the hangovers, and me and the line manager.

The plan, was to abseil into the great cave on Muckish, and then go for a pint. The wind should be from the SW so the north face should be sheltered.  When we parked, inability to open any of the doors on one side of the car, and alarming rocking of same, indicated that the wind was not as anticipated, but undeterred, we climbed out of the other side, and crabbed our way towards the mountain. The wind, which occasionally dropped to hurricane force 17 (+ hail), relented somewhat as we got to the base of the miner’s track.  We met a bloke with a dog coming down.  Martin pointed out that the wind wasn’t too bad earlier in the morning, but we had timed out arrival impeccably at the height of the storm.

To climb out onto the western flank of the mountain, scramble to the edge of a cliff, and abseil seemed suicidal (especially as Alan had never abbed before) so we decided to go up the miners track and see how it went.

A splinter group of Martin and Marty (the mad Martins) was seen to veer off and head for the cave.  We pretended not to notice.  It was ok up the track, which turned to snow higher up.  Another splinter group, they of the hangovers, choose to go up a snowy gully, and met us at the sand pit.  A quick scally up the lower reaches of Crowe’s Gully was all we were allowed, as herself had plans for the coffee shop in Glenveigh.

Down we went, but I could see the mad Martins at the top of the cave, and still had ambitions of a photograph. Madder Martin had disappeared, but could I get there in time to take a photo of the lesser mad Martin on the ab?  I raced across meeting Terry (who had changed his mind about staying in the car) en route. When I got to the base of the cave and gazed aloft, there was madder Martin dangling euphorically below the roof, and in no hurry to rejoin humanity, (possibly because there was a big knot below him).  To be fair the knot was almost at ground level, but nevertheless hard to unpick, and almost as hard as getting Marty out of his pre-war harness.  Lesser mad Martin untied the rope and walked down, and we all went our separate ways, some to Glenveigh where we met up with the North West, and some elsewhere.