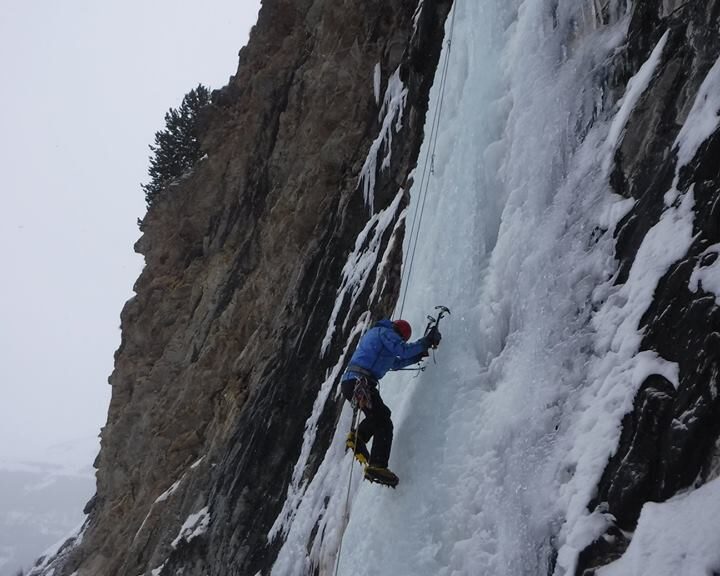 George, Finbarr and self set off to Cogne via Ryanair and Sicily Car hire, and it all went quite smoothly, meeting Jack Bergin, (who had driven out), within an hour of our arrival.

George, a veteran of previous Cogne campaigns, rightly felt that we should start off with something not too difficult, particularly due to the age profile of his comrades.  The handiest best known route of this type being Cascade Lillaz, we headed there, only to find that there was a substantial queue at the bottom.  This came as a surprise as there was little sign of any other ice warriors in the village of Cogne.  Undeterred, we headed off through the woods to come upon a much more daunting affair which George identified as Tutto Relativo, a 4, which looked like a Rjukan 5+.   Not having ice climbed for about 10 years ( Finbarr has only done one route in Ponte Di Legno) we left Jack to belay George, and warmed up on a much smaller piece of ice to the right, placing and removing screws, and practising technique.  This proved worthwhile, as when it came out turn to climb the first pitch of the route (which George had ably led following his ‘Point 5’ practise route), we managed better than a ‘ring rusty’ Jack.  The second pitch was overhanging icicles, so we abbed off and went back down to Lillaz.  Quiter, but now beginning to melt in the late afternoon, I led the first 60m pitch, Finbarr the second, and me again the third and forth.

George had taken the steepest possible line on the first pitch, burning out Jack, so when we finished, we joined them in the café bar at Lillaz village.  Great first day.

Day 2 took us up a different valley and to the bottom of a grade 3 (looked like a Rjukan 4) called Thule.  I had a notion to lead the first pitch but cowardice set in, and when I watched George struggle, I thanked the craven gods.  Actually it wasn’t too bad on a top rope, and I began to feel comfortable on ice again.  George was belayed far back, about 20m below an ice curtain. Jack and Finbarr took a look at it and abbed off, while I belayed George.  When he reached the icicles, he was concerned lest he hadn’t enough screws, and decided to belay in a cave underneath and bring me up.  Cold water ran down his neck and the curtain looked frail, so he decided to abb off, but the screws were way off to his left, so he belayed me as I climbed up and took them out, before he lowered me back to the belay.  Some French climbers arrived at the belay and explained that it had been very dry, so what normally would have been a solid block of ice was now just a curtain of icicles, and thus harder.  We bailed!

Day 4.  Low cloud.  A long walk into the ‘Money’ area in poor visibility (after our initial objective was considered very avalanche prone)  sounds of many climbers led us up to the bottom of one of the most attractive routes called Cascade Di Patri 3 ( more like Picadilli Di Circuso).  What did we expect on a Sunday?  They disappeared quite quickly, and Jack and George led the first lovely pitch.  I seconded Jack and led the short second and third pitches, catching up with the hoardes on the big fourth.  Casting caution to the wind, I decided to lead, beginning a catalogue of incompetence, which I shall describe.

A. First screw, handle gets entangled in my wrist loop- delay. B. Second screw won’t go in, as blocked with ice. C. Drop replacement screw. D. Next attempt cracks a piece of melting ice, and it has to be relocated. E. Finally get second screw in, but Elvis leg now in evidence, right glove soaking, and hand numb. F. Just as wondering if this was a good idea, Finbarr points out that he thinks my crampon has come loose.  Get lowered off. Follow George up.

Day 4.  Every day starts off with a quandary, but seems to work out.  This is no different.  Clear but brutally  cold, but at least we can see everything, everything that is buried in new snow, or has a queue.  Across the valley there is a big route, Cool Couloir, still in shadow and with only 2 climbers on it.  On reaching the bottom, we realise that it is big and steep and graded 4+, and the guys onit are not finding it easy.  George, (he of Point 5), is keen, not having climbed it before, so Finbarr belays him while I decide to take photos.  Camera drained by the -20 temperatures.  George gets up it, and I learn that I will have greatness thrust upon me as Finbarr has cold feet ( and cold everything else).   A sustained 60m pitch has me up with George.   The second looks shorter and easier so we decide to give it a go.  It is neither. The first two thirds of this 60m pitch is fine , but the top George described as Knarly.  It was that, and a few other things, but worse, I got soft snow on my glasses, couldn’t see me feet, and couldn’t let go my axes to clear them.  Somehow I got up.  2 abbs and we were down.

Day 5. Injured knee, and Achilles tendon.  Cleared up the room while the others went back to retrieve a screw dropped the day before.  Drove to Bergamo, while Jack tried to unfreeze his diesel.  Overnight in Bergamo, and home to meet the Beast from the East!!