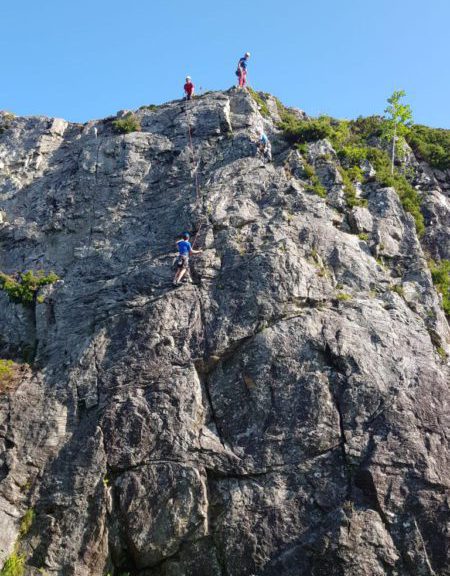 With the promise of fine weather and good company it was an easy decision to journey to Sligo on Saturday morning for the Happy Valli Meet.

I was the first to arrive at Valli’s; it was a fine morning so we headed to the Happy Valli Crag to make a start.

By the time I was finishing the first climb ‘Colmcille Corner’ HS Andrew had arrived having just run over a clatter of mountains that morning and the evening before.

We went on to climb ‘Ox Stair’, ‘Part Man Part Biscuit’ and ‘Muck on Top’, all fine routes with the common theme of little protection at the start but just enough higher up when you really needed it. Geoff and Alan arrived a short time later and climbed ‘Snow White and Colmcille Corner’.

We broke for lunch then headed to Scalp na gCapail Crag a short drive away where we were joined by Hugh. The crag is right beside a road so access couldn’t be easier. The first route I climbed was a VS ‘Polish Paddy’ which had really nice climbing if a bit runout in places and hard for the grade. I climbed another VS ‘Juliana’, a good line with a few more options for protection. By all accounts the HS ‘Garda Síochána’ was s good line and well worth doing. It was obvious that a lot of work had gone into cleaning and developing the crag by local climbers, fair play to those involved. That evening we enjoyed a BBQ and a few libations around an open fire.

The following morning Geoff and I headed back to the Happy Valli Crag for a few more routes whilst the others pursued other activities. We climbed ‘Raven’ which was loose, dirty and a wee bit scary. We then climbed ‘Snow White’ S, which I thought was tricky for the grade. We also tried a VS ‘Elizabethan’ which had potential for good climbing but was to dirty too climb safely so a detour was made to the right with a fair bit of pulling on heather to get to the top.

In the afternoon all were back on the rock for one or two more routes before heading home.

Thanks to Valli, Gerry and Anika for the hospitality and hosting a great weekend.